One question that almost every English speaker asks when learning to read Hebrew is ‘where are the vowels?’ 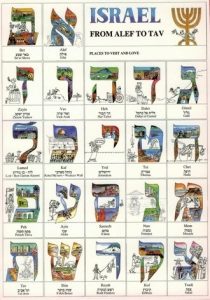 This is a good question, after all, how else can you tell how to read and pronounce the words? The good news is that Hebrew does have punctuation marks (also referred to as vowel marks) or nikkud (ניקוד). And they do make things much easier for novice readers.

In this post we will go over the Hebrew vowel signs, don’t worry, there aren’t too many of them. After the vowels list we’ll look into some common questions and confusing issues surrounding the nikkud signs

Now we’d like to clarify some common questions regarding the Hebrew vowel marks.

Why different marks are used for the same vowels? How can you tell the difference between kamatz and patakh or other similar vowel marks?

Tip: Don’t worry about it, it’s more important to read the signs correctly than to write them

What is the Dagesh?

The dagesh is a mark that tells us when to read פ as P instead of F, ב as B and not v and כ as K and not Kh.

For example, if the word בַּיׅת (bayit) was written without the dagesh בַיׅת it would have been pronounced vayit.

I’ve been to Israel and couldn’t see the vowel signs anywhere? Why is that?

That’s right. In Israel the vowel marks are used only in the first and second grades, so you’ll only find the nikkud in kids’ books and in information texts for olim (new immigrants). The common notion in Israel is that after the first couple of years of reading, kids should remember the words without punctuation marks.

However, if you read with punctuation marks and there is an online text without the vowel marks that you’d like to read, there are some free online tools that will help you. You can copy/paste the Hebrew text and these tools will add the punctuation marks automatically, just google נקדן בעברית and you’ll get a few results.

When writing without nikkud some letters indicate some of the vowels. Usually ו”ו indicates the vowels o or u and יו”ד indicates the vowel i. That means that when writing without nikud, the words sometimes become longer because the letters are added to the word. For example, the word צׇהֳרַיִׅם (noon) is written as צהריים when written without the nikud. When written without the punctuation, a second יו”ד is added, indicating that the first יו”ד is pronounced as i.

There are two types of shva, shva nakh (resting shva) which has no vowels attached and shva na (movement or moving Shva) which is pronounced as an e. There are a few rules that determine which of the two is used. We won’t go through them all but give you three main points:

That’s it. We hope we made the world of Hebrew nikkud clearer now. We wish all the best with your Hebrew studies and remind you that we offer spoken or written courses in Hebrew.